It’s funny how sometimes I get a little “nudge” to write a post. Yesterday, I told my neighbor this story, which has been on my blog list, and then last night my “nudge” came in the form of a thunderstorm.

I love children’s books, and for many years it’s been a goal of mine to write one. I have a few ideas, but this is the story, which would be in a much shorter form, that has always been at the top of my list.

My childhood home had three large windows in the dining area of our kitchen. Those windows looked out into a large backyard that connected with all of the other backyards on our block. We had more than 20 kids in our neighborhood, and the center of it all was the home of just about every game you can imagine from softball to kick the can. It was also the site of a Civil War Battlefield created by my little brother and the other neighborhood boys, a go cart track, a campground, endless parties (including my sister’s wedding reception), and my parent’s 25th wedding anniversary celebration. At the very back of our lot, were two huge silver maple trees that were happy to participate in many games of hide and seek.

My mom was an only child and because of that, my grandmother visited our home on a daily basis. Much of her time was spent sitting at our kitchen table keeping an eye on what was going on in the backyard.  I can’t tell you the number of times while I was growing up I heard my grandmother say, “I guess it’s going to storm, the leaves on the silver maple trees are turned around backwards.” You see, when the wind blew a certain way, the leaves would, as she said, blow so that you would see their beautiful silver backside.

People from my grandmother’s generation may not have had as much formal education as generations to follow, but their wisdom came from their ancestors and from their experiences. My grandmother’s meterology skills were pretty accurate, as we nearly always got a thunderstorm following her prediction.

Post college, I moved away from my hometown and eventually was blessed with two daughters. My first born has always loved to read, which when she was younger prompted a whole host of questions and an eagerness to learn.

My girls were typical kids and were involved in many activities. One blustery day while on our way to a practice, I said out loud, “Gosh, I guess it’s going to storm, the leaves on the silver maple tree are turned around backwards.” My first born immediately wanted an explanation for such a statement.” So I told her about her great grandmother and the trees in my backyard where I grew up. She was very intrigued by such a prediction and immediately wanted to see a silver maple tree. Of course by then we had long passed the tree, so I told her we would just have to keep our eyes open.

A few weeks passed, but she didn’t forget about the tree and when we were out would often point to a tree and ask me if THAT was a silver maple tree. My answer was always the same, “No honey it’s not, but you will know it when you see it.”

It was a spring day and a swim lesson day.  We arrived at the aquatic center, gathered our things and were walking into the building when my daughter stopped and with the most excited look exclaimed, “That’s it!” “What’s it?” I asked. She replied, “That’s a silver maple tree!” She was right. It was right in front of her. There was a breeze and the leaves were turned around displaying a beautiful silver color.

That night I tucked the girls in their beds. We said our prayers and goodnights and I went downstairs to relax after all of the days activities. As I sat down, in the distance I saw a flash of lightning and then the rumble of thunder. After a short while, it began to rain, proving my grandmother’s theory once again. 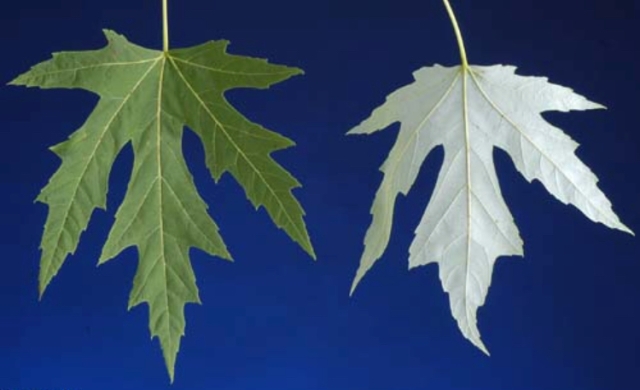 One thought on “The Silver Maple Tree”