I saw a funny quote recently that read, “I have come to the conclusion that buying craft supplies and actually using them are two separate hobbies.” It made me smile because I have often had a similar thought about myself and cookbooks. I like to buy and look at cookbooks more than I actually like to cook. I don’t think people purchase many cookbooks anymore because there are so many recipes online through websites, blogs, pinterest, and you can practically find anything if you just “google” it. But for me, there is something that attracts me to particular cookbooks, and I still enjoy holding them in my hands and thumbing through them with the best of intentions of making some of the recipes. I even keep some of my favorites in a basket on my kitchen island.

My mom was an amazing cook and most of what she made was from a hand written recipe or off the top of her head. It appears that she didn’t share the same love for cookbooks that I do because recently while going through her things, I came away with a large stack of handwritten recipes, which I am so grateful to have, but only a few cookbooks. However, one of the cookbooks is really special. The cookbook’s front cover is missing, but upon further inspection it is a Salisbury cookbook from many years ago, in fact, back when telephone numbers only had two digits. 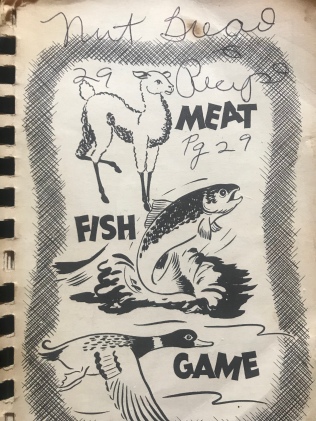 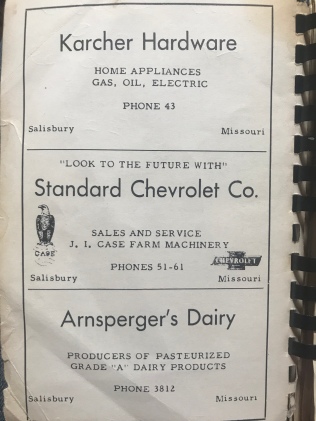 I don’t believe I have ever seen it before, but mom definitely used it as it has hand written notes on several of the pages, and it’s a mess with ingredients spilled on the pages. 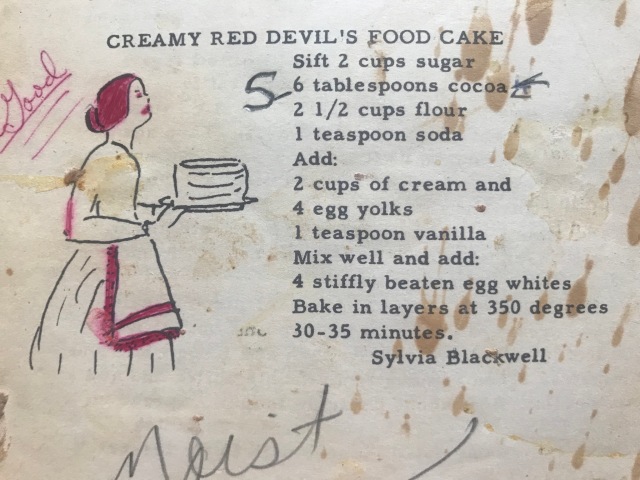 It isn’t only mom’s added touches though that makes this cookbook special. It’s the recipes that were submitted by so many amazing Salisbury women that were the backbone of our little town while I was growing up. People whose names I haven’t heard in years, but have such fond memories of…Mrs. Eldrige Griswold, Mrs. Melvin Keyes, Mrs. Harold Sutter, Betty Hollis to name a few.

One of my favorite entrys is a recipe submitted by Mary Sue Nicholas, the first grade teacher of many of us. The recipe is in fact the popular Asparagus Casserole my mom always made for Thanksgiving. I found it a bit humorous that Mrs. Nicholas’ recipe calls for 1 1/2 cups rich white sauce. Obviously at the time every one could just whip up a perfect white sauce off the top of their head, and maybe some of you still can, but I need a recipe. 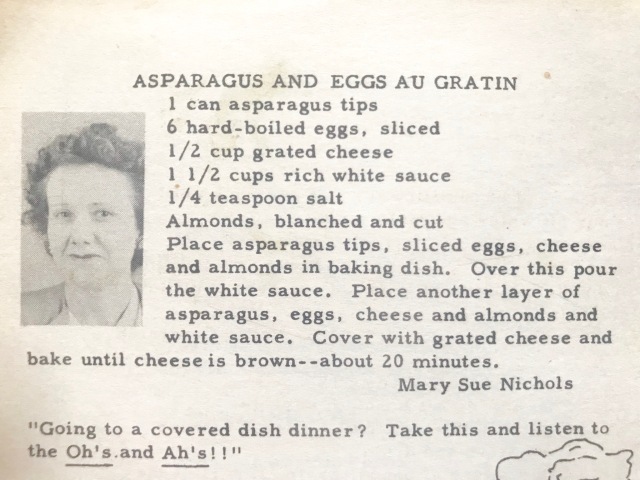 This old cookbook may not make the basket that sits on my counter top, but I will be keeping it for the sentimental value it holds. With the holidays coming up, maybe you’ll want to include my mom and Mrs. Nicholas’ Asparagus Casserole in your menu.

For the white sauce: Mix corn starch and cream until smooth. Bring to a boil stirring constantly over medium heat.  Boil one minute. Add margarine, salt and pepper. Set aside. In a casserole dish, layer 1/2 the asparagus, eggs, cheese, almonds and 1/2 of the white sauce. Repeat layers ending with the white sauce. Bake at 350 degrees until bubbly, about 25 minutes.

3 thoughts on “The Old Cookbook”